Movie of the Week: Wonder Woman

While Marvel had a spectacular streak of success with their comic adaptations for the big screen in the past nine years DC Comics failed to replicate this success so far. Silke and I only watched Man of Steel and weren’t particularly impressed. However based on the promising trailer and positive reviews we decided to see DC’s latest movie, Wonder Woman.

On a mystic island hidden from the world by powerful magic the Amazons are training for the return of Ares, the god of war. Ares wants to bring about the final war that will destroy humanity and it is the Amazons’ duty to stop him. Their most formidable warrior is Diana, the daughter of the queen . When a British pilot is stranded on the Island by chance and tells the Amazon about the horrors of World War I, Diana believes that this signals the return of Ares. She disobeys her mother’s orders and leaves the island with the pilot to find Ares and end the war. But Diana’s quest doesn’t turn out the way she expected.

Wonder Woman has all the ingredients of a good Superhero movie: a likeable protagonist, cruel villains, awesome special effects and amazing fighting scenes. But there is more to it: Diana’s journey. At the beginning she’s innocent and almost naive. She is ill prepared for the horrors of World War I with trenches, weapons of mass destruction and a greatly suffering civil population. Her attempts to help are initially rebuffed by the chauvinistic men of the time. But Diana rises to the occasion and during the course of the movie becomes the iconic heroine Wonder Woman.

I always had a soft spot for heroines: Leia, Ripley, Xena and Hermione to name a few. So I was very happy that a movie production company finally had the courage and decency to make a blockbuster superhero movie with a female lead. The result is well worth seeing and surpasses all the other recent DC movies. I’m definitely looking forward to future movies featuring Wonder Woman.

Posted in Movies & TV | Comments Off on Movie of the Week: Wonder Woman

Movie of the Week: Rogue One

Posted on 31 December, 2016 by Matthias Scheler

The opening crawl at the beginning of Star Wars: Episode IV – A New Hope mentions the first victory of the Rebel Alliance against the Galactic Empire. Almost forty years later the latest Star Wars film Rogue One finally tells the story of what happened.

The movie tells the story of Jyn Erso. At a young age she lost her parents when her father, a brilliant scientist, was abducted by the Empire and her mother got killed in the process. Now the Rebel Alliance desperately needs Jyn’s help to search for her lost father. Over the past decades he has been forced to work on the Empire’s new super weapon, the Death Star. And finding him might help to somehow stop the Death Star before it can bring about the end of the rebellion

Rogue One is quite different from other Star Wars films. It is not a fairy tail, but rather a war movie. The lines between good and evil are more blurred than usual. After a slow start the film turns into a fulminant action spectacle with an all-out battle between the Empire and the Rebellion.

Rogue One is a movie for existing Star Wars fans. It makes much more sense watching it when you already know Star Wars: Episode IV – A New Hope although the latter is strictly speaking the sequel. I definitely enjoyed watching this latest Star Wars film, in particular due to the well placed references to the earlier movies.

Posted in Movies & TV | Comments Off on Movie of the Week: Rogue One

Vader in the Odenwald

Posted on 4 August, 2016 by Matthias Scheler

Silke and I are currently visiting friends in Germany. Yesterday our friends took us to the Felsenmeer in the Odenwald for a nice walk. We picked a tour of 9.5 kilometres which didn’t sound like that much. But Silke and I are Fenlanders and not used to mountainous terrain at all. In the end it took us four hours (including breaks) to complete the walk and we were quite exhausted at the end.

The really positive surprise was how well our dog Vader coped with this long walk, his first long tour after the surgery last year. He ran around the whole time, went up twice as many slopes as the rest of us and even bounced over the boulders when Silke went for a short climb. 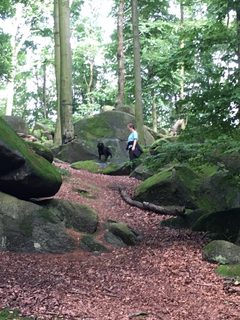 Vader’s surgery and the recovery period afterwards were hard on all of us. But it was well worth it. Our little dog is fit as a fiddle, maybe better than he has been ever before. 😊

Posted in Pets | Comments Off on Vader in the Odenwald