Commander Lilith & the Fight for Sanctuary

In September Borderlands 3 the long awaited sequel of the video game hit Borderlands 2 will finally be released. What is amazing in this case is the marketing campaign: instead of flooding Youtube with trailers Gearbox Software released a free DLC for the predecessor Borderlands 2 called Commander Lilith & the Fight for Sanctuary. This DLC comes with everything that you would expect from a paid for content release:

As a big fan of Borderlands 2 I greatly appreciate this welcome surprise.

Game of the Month: Warframe

Posted on 30 September, 2018 by Matthias Scheler

A few month ago a few friends and I were looking for a new cooperative multiplayer game that we could play together. Nick suggested to try out Warframe. Warframe was first released over five years ago. But as Digital Extremes, the company behind Warframe, keeps evolving and expanding the game it still has a large active fan base. The game is free to play so I decided to finally give it a try after having heard about it on multiple occasions before.

Warframe is a Science Fiction third person shooter. It takes place in the fully colonised solar system after the Orokin empire, which drove the expansion, has collapsed. The player takes the role of a Tenno who uses humanoid constructs called Warframes as elite strike force units. The Tenno fight various factions who try to gain control of the Solar system and destroy the remaining human colonies in the process. The goal of the game is to unlock access to all planets, collect powerful gear (mostly Warframes, weapons and updates for both of these) and unravel the secret behind the Tennos existence.

To progress players need to complete missions, alone or in a team of up to four players. Each mission requires the completion of specific objectives like exterminating the enemy, defending a computer console or breaking into enemy vaults. Successfully completed missions grant experience points, crafting resources and a variety of other rewards like Warframe or weapon components. The enemy faction and design of the levels vary between planets. Unlocking a new planet requires unlocking a path to the junction which connects it to the next location and fulfilling multiple requirements, for example defeating the boss enemy on the particular planet. The further the player progresses through the solar system the tougher the enemies on each new planet will become. But access to new Warframes, weapons und upgrades (called mods) will help to compensate for the increased difficulty.

Warframe is very well made looter shooter game. The basic game play is a lot of fun thanks to the variety of powerful weapons, the over the top Warframe abilities and the spectacular character movement. Warframe definitely delivers on its promise to make the player feel like a Space Ninja. But the game mechanics behind this space combat are actually quite complex. The game itself doesn’t do a particular good job of explaining these but the Warframe Wiki is a big help here. If a player is willing to invest a bit of time to learn creating a good build the game will reward her or him greatly. The same weapon can be very disappointing in its vanilla state and an absolute monster with the right mods installed. Story telling takes a little bit of a back seat most of the time. But when the player finally unlocks the cinematic quests they are rewarded with astonishing revelations about the lore of the Warframe universe.

Warframe is often compared to Destiny and Destiny 2. And while there are differences there are also a lot of similarities. Warframe often delivers what Destiny only promised like a long term game experience in an ever expanding world or really good loot that the player can grind for.  Digital Extremes also made the wise decision to completely separate the PvE (player vs. enemy) and PvP (player vs. player) side of the game. Most players completely ignore the PvP aspect and enjoy only the PvE whose game design is not constrained by the requirement to have a balanced PvP game play. This is something that always plagued Destiny and ruined Destiny 2.

I personally enjoy playing Warframe a lot and have invested some money in the game to support the developers. The shooter game play provides the Space Super Hero experience that I enjoyed in games like Mass Effect 3 or Destiny. And with over two dozen Warframes, hundreds of weapons and so many mods there is always a new build, a new way to play the game to discover. The social aspect of the game is also very well developed. You can not only run missions with your friends, you can also share some of the loot with them or trade with other players. The latter is something which I often missed in other multiplayer games. The game is however designed around grinding. I actually enjoy that (most of the time) but it is not everybody’s cup of tea.

Posted in Video Games | Comments Off on Game of the Month: Warframe

Posted on 23 December, 2017 by Matthias Scheler

Earlier this month our beloved Cocker Spaniel Vader celebrated his eighth birthday. He got two lamb ribs as an extra treat in the morning, a nice walk along the Great Ouse in Ely, dog biscuits at Peacocks and a generous sample of dog treats at Scampers. Not a bad day overall! 🙂 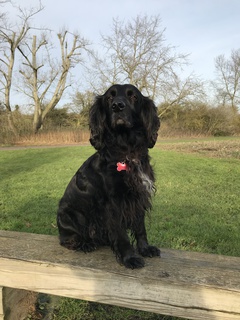 Unfortunately Vader developed some health problems during the past year. They were caused by arthritis that he has developed as a consequence of his joint problems and the required surgical procedures to fix those. But with the right meds, dog massages every four weeks and hydrotherapy to boost his fitness we fortunately managed to restore Vader’s quality of life.

Posted in Pets | Comments Off on Vader’s eight Birthday