Posted on 20 December, 2015 by Matthias Scheler

Earlier this month our dog Vader celebrated his sixth birthday. Unfortunately Vader had another year with health issues. Silke and I noticed that he didn’t seem to be enjoying long walks as he used to. Frequently Vader wanted to turn around and go home earlier than usual. When he repeatedly showed signs of pain in his lower back area Silke took him to our local vet for an X-ray. The good news was that his spine was alright. But the bad news was that Vader was suffering from severe arthritis in his left hip. As his condition was getting worse Silke and I with a heavy heart decided to take Vader to a specialist clinic for a hip replacement. We had to drop him off on a Thursday and after a weekend full of worries we got our little darling back the following Monday. The surgery had gone very well but Vader was of course still sore and a bit jaded. 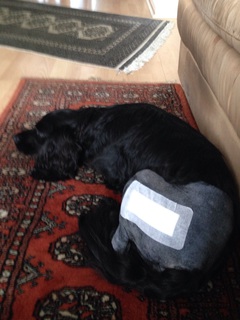 Fortunately Vader’s recovery went very well in the following weeks. The final assessment by the veterinary surgeon gave him a clean bill of health. He is however still on restricted exercise and only allowed walks on the lead and as a result feels rather bored. 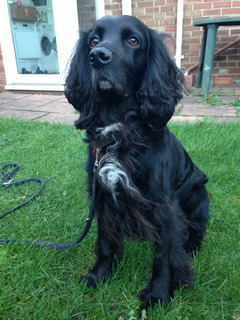 But in a few weeks even that will be behind us and Vader can again run around like a crazy Spaniel. 🙂

This entry was posted in Pets. Bookmark the permalink.