Posted on 17 November, 2006 by Matthias Scheler

Today was the day my wife Silke and I tried to climb the top of the Teide. Doing that was one of the main reasons that my wife wanted to visit Tenerife in the first place. After driving for about one and a half hours through the mountains on a road with a lot of the usual serpentines we arrived at the base station of the cablecar going up to the top of the Teide. We queued for about 45 minutes to get tickets and to get in the gondola.

On the way up my problems started: I got struck by Altitude Sickness (combined with a bit of vertigo). Both my feet and hands went numb and started suffering from pins and needles and I felt dizzy. With some effort and loving help from my wife I managed to stay on my feet until we reached the top station. We went outside and I sat down on a bench. After a few minutes the symptoms eased and I suggested that we try to climb up the 163m to the peak.

The path leading to the peak however was narrow and steep and I was still struggling to adapt to the altitude. We made it up about one third of the way before I had to give up. Because my wife dealt with the conditions much better I asked her to go on. Thanks to her determination she made it all the way up to the peak and took some great pictures. This one shows the crater of the original volcano Las Cañadas. The Teide rises on the north side of this crater: 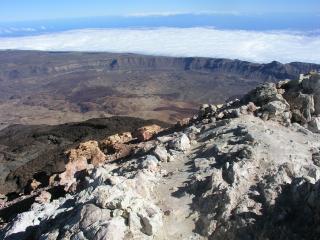 It took Silke almost two hours to get to the peak, take a rest and climb down again. After she came back we returned via cable car and the ever present serpentines to the hotel where we enjoyed a well deserved victory feast. Being able to breathe easy again was an additional bonus.