A spot of Snow

Posted on 2 February, 2009 by Matthias Scheler

Today for the first time since Silke and I moved to the south east of England we had snow worth mentioning. It started to snow yesterday evening and didn’t stop before noon. As such heavy snowfall is unusual for this part of the country it caused a massive chaos. The treacherous conditions on the roads resulted in several accidents, trains had to be cancelled and both the buses and the tube in London weren’t operating. The airports in the area had to either cancel a lot of flights or even close down.

By contrast Silke and I had a really nice day. As we are both fortunate enough to be able to work from home we could avoid the traffic chaos. Silke took a few photos in the morning and we had a snowball fight afterwards. 🙂

During our lunch break we even build a small snowman. 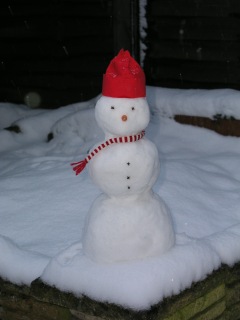 In the afternoon it got a bit warmer and the snow began to melt. I guess that most of it will be gone by tomorrow.

This entry was posted in Real Life. Bookmark the permalink.